A downloadable game for Windows

As submitted to the Persistent Roguelike Jam.

WASD to move, you are that green square.

You cannot attack in this game. Instead make enemies run into and kill each other by manipulating their rules.

Hover over enemies with your mouse to see their rules. Each rule is represented by a different colour in a different corner of the enemy. You don't need to memorise them just hover to check. The game enemies move just after you move and fire their weapons just after that. A blue box shows where an attack will be relative to the enemy's position and direction (with regards to lasers: This means you can pass through the blue box because that is not when it is fired). A blue line shows what something is tracking. Something will stop tracking its target once it has been outside of its vision area (which is the red zone) for 20 turns. N.B. There is a difference between Lazy actions and Movement type. Just remember, something can only move forward and backward when tracking and also be allowed to move in all directions as a lazy action.

Sometimes a level will be impossible. This is  intentional, just kill yourself if you have to. Generally, if you're paying attention you can figure out what is going to be problematic before it makes the level impossible and take action to make it less problematic.

Your goal is to reach the other side of the screen and touch that blue square which is the exit. The exit is only open when there are one or fewer enemies left in the level. You can tell when this condition is met because the music changes.

N.B. This was never put into the game (we wanted to):

Nobody wanted to fight anymore, so they built machines to do it for them. However, this left us defenceless. They weren't smart, but they could fight much better than us. They overran everything. Then they started killing each other.

Now, hardly anything remains. You are one of the last survivors. You came to the science outpost in search of the legendary cloning technology that would allow humanity to rise again. And you found it. But not without major difficulty. Somehow, the outpost is swarming with robots. And they have destroyed your ship.

The outpost was one of the last places to be discovered by the robots. Hardly anyone lived there, after all. They were working on cloning tech, supposedly doing all kinds of brutal experiments. People tried fleeing there in the wake of the robots. They were never heard from again. Perhaps they had been taken as test subjects. Perhaps parts from their ships had been salvaged and re-purposed. You do not know.

Back then, the "robot war" idea had been proposed by Rising Star corp., who were starting to get into politics. They had the money, the influence, the power. By the end, they were the only ones left. Over the course of their existence, they authorised many projects that others would have deemed unethical, including cloning. When the crisis started to take hold, they used their scientific enterprises to try to develop a super weapon against the robots. This base is no exception.

Throughout it are scattered several tools and components that can be used against the robots. All prototypes, of course, none of them were ever finished. You are going to have to finish them yourself. Part of the outpost was even converted into a factory at some point, making weapons for the last soldiers.

But it was too late.

More about this game's development:

Unfortunately the artist we originally asked to work on this game, Legendary Pineapple, was unable to contribute any finished art for a number of reasons. About a week before the end of the jam AnimeNoodles joined the team and has supplied the cover icon for this game. Sadly, I didn't have time to make the edits to his art necessary to make his art for the robots work in the game and neither did he, mostly because of online school.

In the last couple of days of the jam, Wolfie offered to make the start and end screen and he was amazing in getting that done. Even more last minute was the addition of my sister who drew the walls and one other piece of art we didn't use.

For the artwork I used Photoshop Elements.

This game was made in GMS2. I enjoy using GMS2 but this was an experience of many many code rewrites as I learnt how to do things and decided how the game should work, this is only my second game jam after all. I don't want to talk about it, ok?

The music was done using a program sunvox which is a pretty intuitive program which allows almost full control over how the voices sound. It was my first time using the program but it was easy to get the hang of. I started by coming up with some riffs then decorated them with background chords and sounds.

Here is an list of everything that was cut. There is more stuff that wasn't done before the deadline so this is everything we (mostly I) gave up on doing:

Kyrion was a big help in the early stages of the project. He did most of figuring out what the rules should be and was very useful for getting ideas together.

The title as supplied by GermanScientistKlauss (not canon): The adventures of square-man and his non-existent square-woman who has just gotten a divorce and now square-man has to deal with emotional drama while fighting against brainless cubes while saving the world from the same cubes who did absolutely wrong, so its pretty much just a drugged guy fighting against boxes. Yep, that's pretty much it.

Unzip and run .exe file. Don't worry its not a virus! 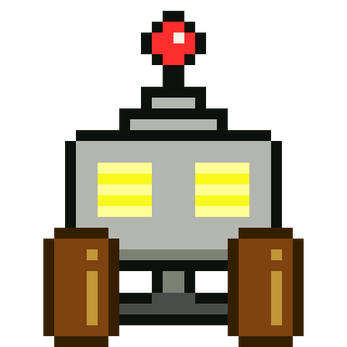